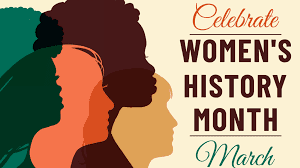 March is Women’s History Month. Celebrating women in history started in 1981 with a week of celebration. By 1994, Congress passed resolutions that designated the entire month of March as “Women’s History Month.” The purpose, initially, was to honor those women who made significant contributions to the United States. It is now celebrated in the United States, United Kingdom, and Australia and aligns with International Women’s Day, which is March 8th.

To properly recognize Women’s History Month, I would like to introduce three women in U.S. history who, to me, epitomize strength, honor, determination, value, and contribution. There are many, many women in our country’s history who represent these attributes, I’m just highlighting three here. You should think about your three.

First on my list is Abigail Adams. Ms. Adams was the wife of our second president, John Adams. She was also mother to our sixth president, John Quincy Adams. What was her significance? She served as a close advisor and confidant to her husband. Ms. Adams is often referred to as one of the Founders of the United States. While she played a key role in the development of our country, she was rarely given the credit she deserved.

It has been noted that Abigail Adams was active politically and wrote often about the challenges of women in the 18th century. She was particularly concerned with business and educational opportunities for women. Her efforts more greatly influenced the development of our country that we may realize. It has been documented that Ms. Adams was more resilient and level-headed than her husband.  Perhaps she made more decisions about our country’s future than we realize.

Second on my list is Susan B. Anthony. Born in 1820, Ms. Anthony was an early activist for women’s rights. While only 17 years old she became active in the movement against slavery. She remained steadfast on equal rights for everyone. In 1866 she helped develop the American Equal Rights Association, promoting equal rights for women and African Americans.  That’s right, 1866! It took far too long for this movement to become law.

Ms. Anthony faced incredible opposition. Nonetheless, she persevered and was adamant about moving her cause forward. Much has been made about Ms. Anthony’s political beliefs, which I believe can be argued because I am not sure that we know the exact truth. What I do believe is that Susan B. Anthony started a movement that most certainly helped women and African Americans in the United States. It took strength and determination to make that happen. For that we should be grateful.

As one who was raised in a strong Christian home, she professed an extraordinarily strong faith. Her faith must have given her the courage needed to perform her work. One can only imagine the incredible odds against her and frightening experiences she encountered every day. To this day Harriet Tubman is known for being one of the bravest women in the history of the United States.

Two additional points of interest about Harriet Tubman. First, it is said that she always carried a revolver and was not afraid to put it into action. I would assume so! She probably should have carried two.  Secondly, she was nicknamed “Moses” because of her continued efforts to free other slaves.

While I mention only three in this post, there are many more who have helped develop our country and world. We should be grateful for the work of these incredible women. I encourage you to come up with your own three women who you think deserve praise.

Posted by Blanton Advisors at 7:28 PM

Barry D. Blanton Advisors, LLC is committed to empowering entrepreneurs by equipping them with resources to help them make well-informed decisions without spending an excessive amount of time or money. We offer consulting service on a flexible contract basis providing proven financial leadership while emphasizing integrity. By partnering we become a valued member of your business management team, sharing over 70 years combined professional accounting, business and finance knowledge and experience to help business owners control costs, capitalize on opportunities, improve profitability and work through crisis.